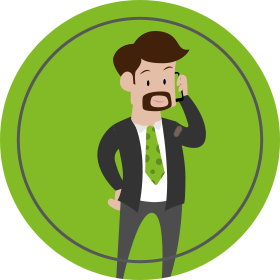 Franck is an IT manager in a large company. His team is made up of 5 technicians who help him to keep the IT infrastructure of he company operational on a daily basis.

The infrastructure of the company where Franck works, initially simple, has grown and become more complex over the years.

It has therefore gradually lost a global vision of its infrastructure.

The team spends a lot of time solving incidents and responding to user requests.

As these interventions take a long time, developments and new projects are difficult to plan and implement.

Franck has already tried to integrate a supervision tool to help him in his daily life. Unfortunately, he quickly realized that the tool did not integrate all of his equipment and applications and required him considerable management time.

When Franck decided to take matters into his own hands, he called on ESIA to help him set up an efficient supervisory system.

An ESIA consultant, in collaboration with Franck, managed the deployment of the solution within the infrastructure. Franck had nothing to worry about and could quickly have a system integrating all its hardware and applications.

Since ESIA is deployed, Franck has a clear vision of his infrastructure and can anticipate problems before they happen.

The team is now more efficient and less stressed. The time saved allows the team to concentrate on the evolution of the infrastructure and to devote more time to the new projects.